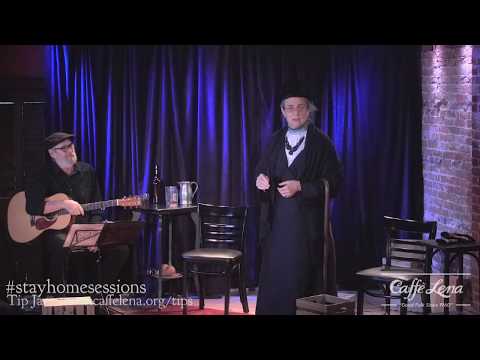 LIVE STREAM: Are you enjoying the show? Please use this link to send a tip to Mother Jones and support Caffe Lena: https://www.caffelena.org/tips/
Become of member of Caffe Lena's Patreon community: https://patreon.com/caffelena

Through story and song, Vivian Nesbitt (Breaking Bad, The Night Shift, Longmire, Law & Order SVU) portrays Mary Harris “Mother” Jones, with musical accompaniment by John Dillon, in Si Kahn‘s one-woman musical about the infamous labor organizer famed for her tireless efforts on behalf of the rights of the working class.

The Caffe Lena Stay Home Sessions are performances recorded in the listening room, broadcast live for the community to enjoy during this uncertain time of physical isolation. Please prioritize your health and well-being, and use these nightly live streams as a respite from the stress of our current situation.

Caffè Lena offers extraordinary music in an intimate venue steeped in history. It has been in continuous operation longer than any other folk club in the USA. First opened in 1960 in Saratoga Springs NY, the Caffè's early years were entwined with the social movements of that era. Emerging artists such as Bob Dylan, The Freedom Singers, Arlo Guthrie, Emmylou Harris and Don McLean took their turn on the stage, alongside esteemed veterans such as Clarence Ashley, Mississippi John Hurt, Skip James and Pete Seeger. The venue has been called “An American Treasure” by the Library of Congress, and has received recognition from the GRAMMY Foundation for its contribution to American music.